“I took a leap of faith in 2007 and started German Werks in Santa Maria and have been doing great and only getting busier.” 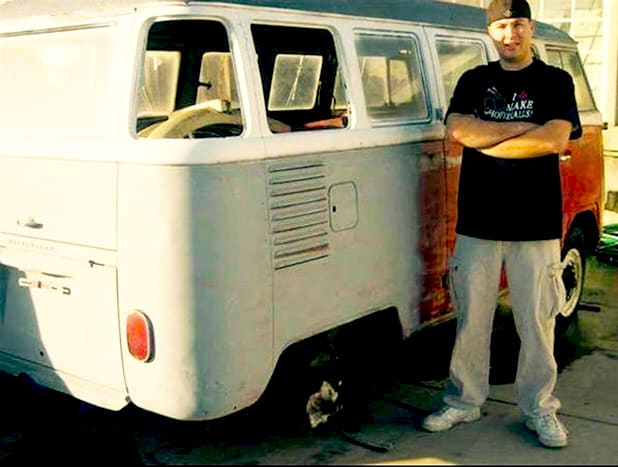 Born and raised in Santa Maria, started working at a young age of 8 years old being a newspaper boy until the age of 16 and an active member of the Boys and Girls Club of America.

People ask how I got started into cars “did your dad teach you?”  No, I was self-taught. I started wrenching when I was around 12 years old. There was a broken down go-kart in my parents’ backyard and I was tired of pedaling my bicycle all over Santa Maria delivering newspapers, so I decided to try to get the go-kart running and use that as my transportation. Yes, I was that kid in the neighborhood you either hated or loved because I would have a very loud go kart roaming your neighborhood daily throwing newspapers. It took many attempts to get the go-kart running, but I figured it out of some small gas engine books I got from the Santa Maria Libary.

Long story short after that go-kart was running I couldn’t keep my hands off of anything that had a motor and wheels. I had four years of automotive class at Santa Maria High.

Two years of schooling at Universal Technical Institute and was selected to participate in The Audi Graduate program for four months of intensive training. From there I started at Cutter motors Audi of Santa Barbara from 2000 to 2003 being sent to BMW Factory training while I was working for Cutter motors was a great bonus to curriculum and gained me the knowledge to become a BMW technician as well while working there.

I then worked for Fletcher Jones Mercedes Benz of Las Vegas from 2003 to 2005 and spent one year with the team over at Las Vegas Audi/VW where I was the shop foreman 2005 to 2006.

Heading back to California, I landed in San Luis Obispo working For Kimball motor company as a VW/ Mercedes Benz technician. My vast knowledge and experience were compacted so quickly I have been fortunate to work side by side with some of the most exceptional technicians and mentors I could have ever asked for. I took a leap of faith in 2007. I started German Werks in Santa Maria and have been doing great and only getting busier with minimal advertising. My workload per day has been solely from word of mouth.

Thank you for visiting my website and for spending the time to read this. I can’t wait to see what’s in store for the future.

Typically replies within an hour

I will be back soon

Hey there 👋
What can I help you with?
Start Chat with:

Just left us a 5 star review

Overall Rating
4.9
Based on 47 Reviews
Write a Review

Where you want to leave a review?

I appreciate the effort of Mr. Ethan Payne for helping me work from home despite being quarantined. Profits been made weekly as he promised, i invested $700 and now making $8,200 weekly, All thanks to him, wouldn’t have been easy during this lockdown he made me and my Family smile. Contact him via Email: [email protected] WhatsApp:+1 (256) 215-1536

Having tried different trading platform , my last experience with Mr. Ethan Payne is the best ever, I traded with $500 and within a week I made profit of $6500 and to my greatest surprise I earned a very good profit and made my withdrawal successfully and directly to my bank account. So I recommend Mr. Ethan Payne platform for effective trade to every one. Contact him Via: Email: [email protected] WhatsApp: +1 (256) 215-1536

Are you looking for a genuine, trustworthy trader/motorship in Crypto, NFT and Binary options, then Mr. Ethan Payne is the right one for you. I was looking for the best not until I read good reviews and recommendation about him. With his Great skill of Trading and Mining, he was able to make good profit of my first $1000 investment. I was amazed how he turned a $1000 investment into $5000 just within a week. At first i thought this was impossible until i give it a try myself. I earned a very good profit and made my withdrawal successfully directly to my bank account with no hidden charges. If you wish to invest, kindly Contact him with the below details. WhatsApp: +1 (256) 215-1536 E-mail:[email protected]

Effective trading software. There are so many good features and I find it easy to use. Signals are reliable, services are great I can highly recommend MR ARNOLD CLARK platform as the most profitable and reliable platform Good profit and fast withdrawals. Highly commendable trading brokers. I had a good trading experience overall i make $15,000 with just $2000. Fast and easy withdrawals. I never had to experience troubles with documents and I receive my money on time. For the past few months of trading with them, I am happy and satisfied. contact him email [email protected] WhatsApp: +1(910)2274267

Sean really takes care of you. I stopped by to make an appointment, and he took the time to look over my bike and saw 2 things that needed urgent attention... and he fixed it immediately and didn't ask to be paid. This guy really earned my trust and will be who I go to from now on.

Sean is the best guy to deal with

For the most part, very good delivery time and knowledgeable about your needs

awesome guy to deal with

Another great job by Ryan. He is an expert in both modern and classics. It's great being able to get parts for my classic VW local and not have to order...

He is wonderful! They are the only ones I would trust with my bike

This is a fantastic shop. Seane has been in the industry for a long time. He knows his stuff!

I've trusted this shop for over 5 years with my Triumph Daytona needs. I've my motorcycle for the racetrack and street, so knowing the work is done right is important.

Not only repairs your bike but does a thorough safety check and necessary repairs.

I have an Audi and Ryan has been able to do repairs and oil changes for me. He runs a great shop and I am very satisfied with his level of service and detail.

Does great work, and quite knowledgeable about a variety of bikes!!

Did a great job, kept me in the loop on what was needed and fit me in quickly. Highly recommended.

Great experience. Would not hesitate to do business again.

I cannot say enough good things about Cycle Works. I have always received friendly, helpful, expert, and affordable service for my Hondas there.

Excellent work. The place to go for your VW repairs and maintenance.

Not only is he honest, skilled, and knowledgeable... but more affordable than all his competition. Honestly I would pay top dollar for what he provides, but I don't have to. Pay less...get more.... you're crazy to go anywhere else. Unfortunately he doesn't work on Harley Davidson, but if you ride anything else....

I been here a few times, each time the price was good and the service was even better. I would highly recommend Cycle werks any days of the week.

My source in the central coast for air-cooled VW service. If I had a water-cooled VW, I'd drop it off to Ryan at German Werks too.

This is your one stop German Auto Repair place in the Santa Maria Area! Thanks again for keeping my BMW and my vintage Volkswagen on the road. I highly...